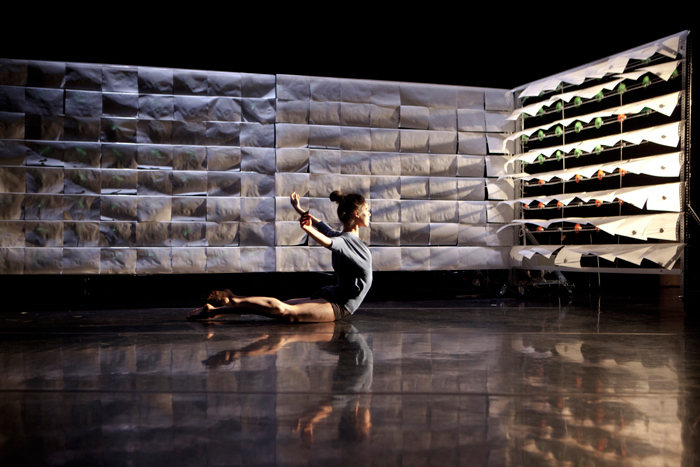 «While we don’t necessary think about it most of the time, air has had a huge aesthetic impact in dance for centuries. From ballet, where dancers were meant to be lithe and give the impression of floating with grace and control, to Isadora Duncan with her flowy dresses and Martha Graham’s focus on breathing and its impact on the movement, air has been more than just what occupied the space around the dancers. In Quebec City choreographer Karine Ledoyen’s latest work, Trois Paysages, air becomes the source of creation and inspiration, both for the conceptual aspects of the piece and the movement research.

At the start of the show, there is a long wall of sheets of paper on stage, divided into sections that can fold into each other. We later discover that the wall can be rolled around on stage. We are told that there is an unknown element added to the work, a member of the audience who has been chosen to take part in the piece, unaware until a few minutes of the show of the role they would play. We are introduced to the lucky (?) new performer who is given a pair of headphones and sits somewhere in the downstage corner.

A dancer starts an accumulation solo on stage and is then joined by another and then a third, shifting fluidly between a solo, duet and trio. As the work progresses, they move the wall around the stage, changing the configuration of the space, creating a total of three landscapes through which the dancers move. Much of the movement consists of partnering, with the dancers having a direct impact on each others’ bodies. At some points, the « free element », the audience member invited on stage, moves through the space, interacts with the dancers, spurred by instructions from the headphones. At the end of the piece, the dancers leave the stage and release a flurry of cutouts of bodies with inflated balloons serving as head, some of them going up to the ceiling, some trailing closer to the ground. It was a beautiful way to finish the work and a powerful image.

The dancers were very powerful and connected and there was some fantastic movement research. We were treated to some intensely clever partnering that flowed constantly and beautifully and the performers made it look effortless.

Created by composer Patrick Saint-Denis, the wall of sheets, which were blown forward at points by small fans behind the wall, was very intricate and worked very well with the theme. Sometimes it felt like the interaction between the dancers and the wall could have been a bit more developed, but it was interesting nonetheless. The projections on the surface brought it to another level but never felt overwhelming.

Some of the lighting choices were problematic at times. There was one dancer, whom I found very talented but felt had no scenic presence for a long time yet could not understand why. Then I realized that I could never seen that performer’s eyes and realized that was why. Even with the other dancers, I felt at times disconnected from them because I couldn’t see their eyes. The overhead lighting is mostly to blame I think. The choice of bringing an audience member on stage never brought much to the work in my opinion. It was at times interesting but felt a bit gimmicky.

As a whole, Trois Paysages was a beautifully choreographed work with very grounded, connected dancers who flowed through the space. Air as a conceptual element never weighed down the work and actually uplifted it (puns not intended). It was a breath of fresh… (ok I’ll stop there).

You can listen to the Dirty Feet podcast on the No More Radio network by clicking here.» 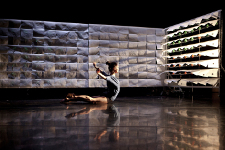