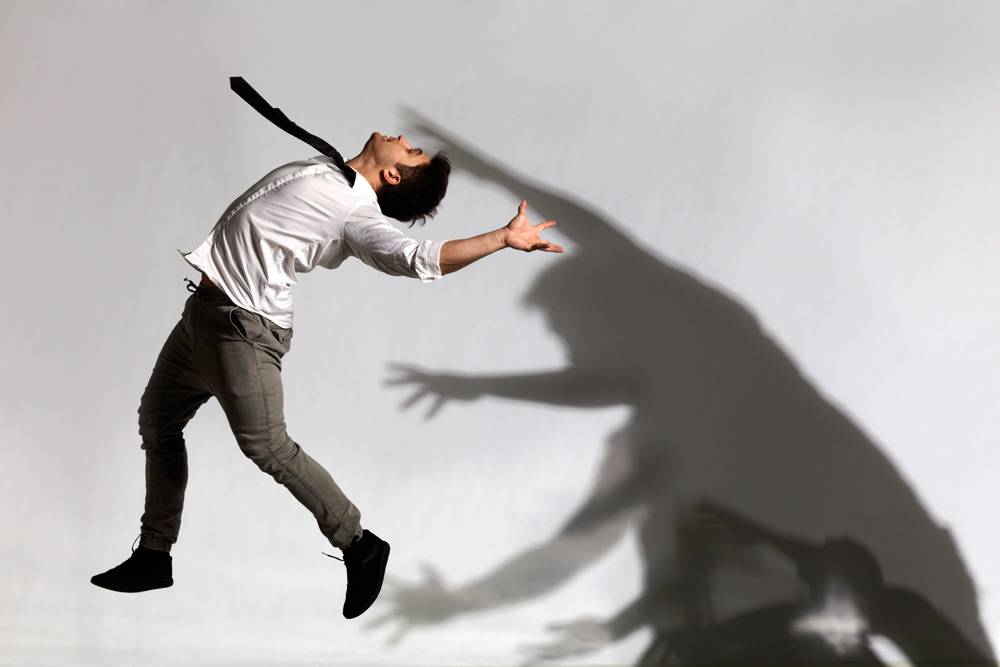 In the minutes before their rehearsal at the Norman and Annette Rothstein Theatre, Shay Kuebler’s cast isn’t doing the sort of soft stretching you usually see before a dance practice. Instead, the men and women are jumping up and down, doing pushups and handstands, and performing “flowers”—a joint-defying Shaolin kung fu move where people windmill their arms so fast they turn into a blur.

Clearly, these folks are preparing for physical extremes—but not just the athletic mix of martial-arts– and street-tinged contemporary dance Kuebler is known for.

His new work, Glory, takes on the rising amount of violence in our world and media. When the rehearsal begins, it’s a vision of six bodies pushing in and exploding out, tackling and tangling. Everyone grabs at Hayden Fong as he pulls and strains, trying to break free of the crowd’s grip; at another point, two guys catapult Lexi Vajda in the air, sending her flying into Rebecca Margolick and Fong in a sort of supercharged stage dive.

When the show premieres at the Chutzpah Festival, it will also find the dancers boomeranging around the floor on harnesses—a way, Kuebler says, of amplifying the movement the way movies and video games amplify violence. “People have been actually concerned for my safety, so that’s good,” the physical daredevil, who also performs in the work, says with a laugh, quickly adding: “That’s why research is so important. We start with one guy, then two, then add more, and it gets more risky.”

Kuebler has been developing the piece as artist in residence at this year’s fest, but it’s a concept he’s been playing with for almost two years now. As a kid, he grew up watching martial-arts flicks and the action movies that were booming at the time. It was also an era when video games like Nintendo were on the rise. But looking around him today, he’s noticed how much more extreme the violence is that we’re bombarded with on-screen.

“With Nintendo, you jumped on an enemy and it blinked. Now kids are playing war games and throwing grenades,” he observes, taking a break in the Rothstein lobby.

All that experience, and Kuebler’s own training in the martial arts as well as hip-hop, tap, and contemporary dance, have coalesced in Glory, a multimedia work that has five video and projection elements, as well as a carefully edited soundscape of classical music, metal, old jazz, TV soundtracks, and more.