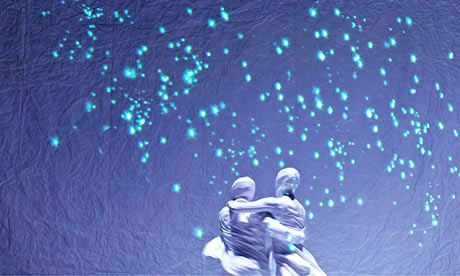 «There’s a new spirit abroad in choreography. It offers us beauty and exhilaration, but with the old aesthetics stripped away. It looks for truth, no matter how unconsoling, and its subject is the transfixing poignancy of the human condition. You sense this spirit in the work of choreographers as disparate as William Forsythe, Akram Khan and Hofesh Shechter. One is American, one Anglo-Bengali, one Israeli, but the issues that they address – memory, ritual, the blaze of life set against the dark eternity of the void – are common to all. And nowhere are these themes more subtly and beautifully explored than in the danceworks of Crystal Pite, whose Ten Duets on a Theme of Rescue can be seen at Sadler’s Wells in London this week, presented by New York’s Cedar Lake Contemporary Ballet.

Pite is a 42-year-old Canadian who has been creating dances for more than 20 years. Her six full-evening works were all made on her own ensemble, Kidd Pivot, and although few in number, are precision-crafted and multilayered. Choreography, for Pite, is the search for what lies beneath the surface of our lives. « I’m trying to recognise and excavate what’s true » she says, when I call her at her home in Vancouver. « I’m looking for moments of resonance. »

Such moments are evident in Lost Action, which Pite brought to London in 2009. In the opening minutes of the piece, the seven Kidd Pivot dancers are revealed against a backdrop of poppies, an emotive image given that almost 70,000 Canadians were killed in the first world war. They flicker into action in a frenzy of darting leaps and turns, and then subside into stillness, lonely as statues. The lights fade, the dancers’ ghost images suggesting the gradual dissolution of memory into history. The piece is rich in allusion, with tableaux echoing the Descents from the Cross of Caravaggio and Rubens, and swaying friezes of linked figures recalling Sargent’s paintings of mustard-gas victims. But you don’t have to get the references to read Pite’s work. Her intentions are conveyed, with strange, fierce intensity, through the wordless language of the body. When her dancers loom from the shadows it’s like a waking dream. Some part of you has been there before.

In Pite’s Dark Matters (2009), a man, living alone, crafts a wooden puppet that comes to life and then, with increasingly sinister purpose, sets about controlling its maker’s existence. The piece, Pite says, is about « loneliness, obsession, and the danger of creation ». If the ideas that feed into Dark Matters are gothic, the dance Pite draws from them is tight and enthralling. Her performers, like the puppet, appear to be impelled by forces outside themselves. At moments, they seem to be wrenched in two directions at once – an experience with which Pite herself is familiar. « In me there’s a politeness and obedience that drives me crazy. It’s my Victorian upbringing. I resent it, and I push against it. »

When Pite uses the word Victorian, she’s referring to Victoria, British Columbia, the town where she grew up and trained in ballet. The discipline of classical dance was formative. « Ballet is on me like a coding, » she says. « I can’t wash it off. » At 18, Pite auditioned for Ballet British Columbia, and danced with the Vancouver-based company for eight years. In 1996 she left Canada to join Ballett Frankfurt in Germany. The company was under the direction of William Forsythe, the late 20th century’s most radical choreographer. Forsythe has rewritten the vocabulary of ballet, pushing the elements of speed, balance and co-ordination to previously unexplored limits. He has deconstructed the very notion of theatricality, and to interpret his ideas has always been drawn to dancers who are physically and imaginatively hyper-flexible. Dancers like the willowy, ever-curious Pite, who danced with Ballet Frankfurt for five years. Pite’s work has been compared to Forsythe’s, and you can see his imprint in her high-speed articulations and boneless imbalances. But Pite brings something else to bear: a refined lyricism which transforms everything she touches. 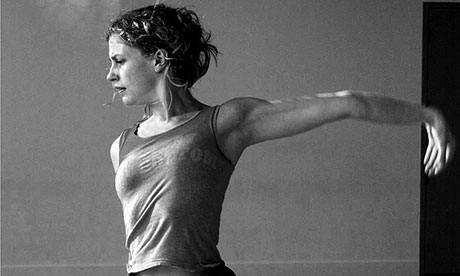 You see this in the delicate texture of The Tempest Replica (2011), based on Shakespeare’s play. To launch the storm that sets events in motion, the female dancer who takes the part of Ariel eats an origami paper boat. On Prospero’s island, the inhabitants are costumed as if they themselves are made from folded paper. You know, at a glance, that the dance is born of the written and spoken word. At the same time, Pite’s choreography demonstrates her determination to engage with « the things that are beyond words ».

« I’ve got an obsession with narrative, » Pite says, adding that this is « kind of a taboo subject ». She’s referring to the belief, in US art-dance circles, that abstract dance (as exemplified by the work of choreographers like Merce Cunningham, Mark Morris and Trisha Brown), has a « purity » that other forms lack. Narrative or « story » dance, with its old-world, imperial associations, has long been regarded with a certain condescension. But Pite has enraptured American critics. The New Yorker called The Tempest Replica « a work of astonishing beauty and thoughtfulness », and US audiences loved The You Show (2010), which opens with a series of intimate duets, and escalates to a point at which the dancers lock together to form massive, duelling combat-robots, like those in the films Transformers and The Matrix Revolutions. The sequence is satiric, but Pite is fascinated by the not-quite-human – puppets, paper figures, robots – and by the way they stretch her movement vocabulary. 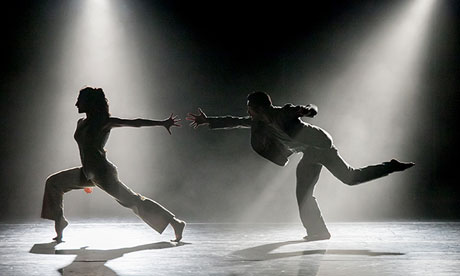 Kidd Pivot have made just one visit to the UK (that all too brief Lost Action season) but Britain will be seeing more of Pite’s work. There’s Ten Duets on a Theme of Rescue at Sadler’s Wells on Friday and Saturday, and next spring Kidd Pivot will be bringing The Tempest Replica to London. Meanwhile Royal Ballet director Kevin O’Hare and Scottish Ballet director Christopher Hampson are both in talks with Pite about possible future commissions. If she were to create a main-stage work at Covent Garden she would be the first woman to do so for a decade and a half. « Conflict and drama, I have to seek them out » Pite says. Let’s hope she finds them here.»

Source: The Observer, via The Guardian, Luke Jennings