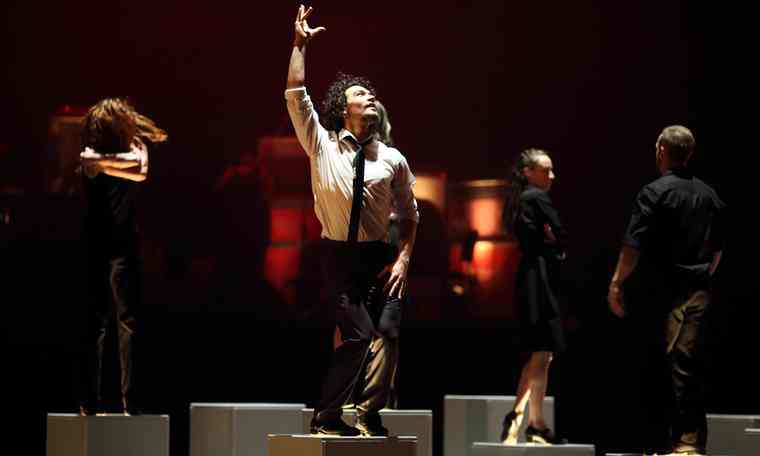 Post-rock is a loudly ponderous, insistently serious kind of music: all brooding soundscapes, apocalyptic themes and long, instrumental songs that are fanned into vast fire-fronts of noise. Everything emotes.

Once I thought it to be very important music. But the drama that sucked me in eventually spat me out. At a gig, I found myself furiously agreeing with a guy who yelled “crescendo is cheap!” I had chewed the colour and flavour right out of it. Post-rock all tasted the same.

Formed in Montreal in 1994, Godspeed You! Black Emperor takes post-rock’s tropes to the hilt. They answer interview questions as a collective, play in the dark and have song names such as Piss Crowns Are Trebled and We Drift Like Worried Fire. So why, then, did I so thoroughly enjoy not one, but two Adelaide festival events featuring them?

The first was a dance piece called Monumental by fellow Canadians, Holy Body Tattoo. When it was originally performed in 2005, Godspeed was on hiatus so the piece was scored with the band’s recorded music. When Godspeed reformed in 2010, Adelaide festival director David Sefton saw his chance to have some chats and align some stars. Thus, Monumental was resurrected – this time with Godspeed live onstage.

Choreographers Dana Gingras and Noam Gagnon are known for pushing dancers to their limits. Only then are the body’s secrets truly illuminated, they say. Still, you think, this is contemporary dance. The abstract and the ambiguous is a given.

Not at Monumental. Its language is direct and confronting. For most of the show the dancers stand on individual pedestals, sometimes gesturing like Communist dictators but more often than not, suffering. They twitch, scratch, pant and cower, knead their aching shoulders and tear at their hair. Even poses suggestive of yoga, tai chi and prayer are repeated joylessly; it is an exhausting drill.

An A to Z of disorders is insinuated: anxiety, anger management, obsessive compulsive disorder, paranoia, Tourette’s syndrome and Trichotillomania (where people pull out their hair). The duets speak of intimacy troubles and betrayal. Lord of the Flies springs to mind during the ensemble pieces. The dancers jerk, lurch, run in mindless circles and trip each other over; marionettes to a spiteful puppeteer.

It sounds unpleasant but it is electrifying instead.