How to Ride a Tornado, par Georges Stamos, The Dance Current 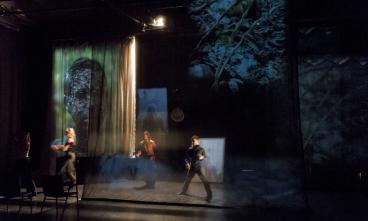 Over the past several years, Québéc City-based choreographer Alan Lake has gained attention locally and nationally for his extraordinary multidisciplinary creations.With his new hour-long quartet Ravages, a surrealistic investigation into bodies encountering natural disaster, Lake brings his work to Montréal’s Place des Arts for the first time and probably not the last.

Dramaturgy filled with references to trauma has been very trendy among contemporary choreographers in Montréal over the past decade. Violence has commonly appeared without context or depth in numerous creations, and often included problematic gender politics. However, rarely have dance-based investigations into trauma been as conscious, poetic and choreographically sophisticated as Ravages. Lake’s violent communion with the natural world is brutal, but also manages to avoid sensationalizing or desensitizing the impact of disaster. Instead this piece, addressing mortality and survival, is at times strangely tender and intelligent.

Ravages is a cleverly organized chaos full of surprising transitions between object manipulation, dance, sound, light and video that collide and dissolve in the space like a free-form jazz composition. The performance begins with vivid imagery projected onto a translucent screen hung across the front of the stage with the live dancers behind in stillness. The image of a huge floating head recedes into lush moss, while skin covered with black fluid, faces screaming in silence, orange smoke signals and deep green forests flare across the space. Composer Antoine Berthiaume’s electroacoustic soundscape of diverse rhythms and melodies accompanies the imagery beautifully and helps support a kaleidoscopic effect.

As the screen is peeled away, stillness erupts into bodies shifting quickly from vertical to horizontal and inversions in percussive bursts of flow. The dancers witness each other and stir the periphery as they tag in and out of partner work, occasional unison and solos, regularly moving the set and translucent screen into various configurations amid the choreography with skilful manipulations.

Stark set pieces by Julie Lévesque effectively echo portions of a house torn away by a storm: a freestanding wall with floor still attached, solid wooden beams and a giant chunk of foam that acts as both a crash mat and oversized bed at times. Catching the projected video images as they crash to the floor when flipped and toppled by the dancers in stunts like something out of a Jackass movie.

Throughout the performance, live action merges with the light design by François Marceau and video design by Louis-Robert Bouchard, evoking dreamlike landscapes, scale and depth of field. White pellets thrown by the dancers create clouds of dust, catching light as they impact on bodies and the set before falling to the floor as powder that remains throughout the piece. Bodies slam together and against matter as moments of impact are paused, suspended in time, then released.