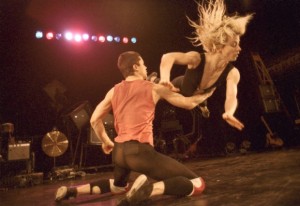 I know the date exactly because it was the first time I saw Louise Lecavalier and La La La Human Steps perform. To say I was blow away by the performance is an understatement.

I’d never seen such fearless dancing before. I didn’t know anything like that existed. Dancers leapt into space only to be caught at the last moment. They twisted in mid air in a technique I would later discover was called a horizontal pirouette. They crashed to the floor in a way I thought should send them directly to the emergency ward with numerous broken bones and cuts. But miraculously, they all got up to keep dancing, and dancing, and dancing.

Lecavalier was in town along with the company and its choreographer Edouard Lock to perform Human Sex at the Vancouver East Cultural Centre. The year before, the company premiered the work at the same venue.

Back then, I wasn’t aware of those kinds of details. I can’t even recall how I got a ticket. All I know is that I ended up there one evening.

I remember that throughout the performance, I couldn’t take my eyes off of Lecavalier’s compact body and platinum blond hair. She was magnificent.

I remember talking with Neal Hall who had been assigned to review the show. (I recently asked him why he was there instead of the usual dance reviewer; he couldn’t recall why he’d been sent. )

He too had become an instant fan of the company.

This is how he opened his review:

“Dancers Louise Lecavalier and Marc Beland stand face to face. Lecavalier tries to slap Beland’s face. He grabs her wrist, intercepting the blow. They kiss, she turns to run. They both run I opposite directions, stop and turn. She hurls herself in the air, her body twisting as it arcs toward the floor. Just before she lands, Beland runs forward, catches her, and saves her from the emergency ward.”

As for the rest of the review, Hall described Human Sex as “a sensational, stunning piece of dance/music/performance art.” He said it was a “magnificent tour de force” that was “orgiastic frenzy of movement.” He wondered if it was “as exhausting to watch as it must be to perform.”

The excerpts of Lock’s works she’ll be dancing are from the period when the choreographer was incorporating more ballet into his work. Many of the moves are similar to the Human Sex years but not as rough or frenetic.

*The photo was taken during a performance of Human Sex at the Vancouver East Cultural Centre. It shows Louise Lecavalier dancing with Marc Beland. Ian Lindsay/PNG