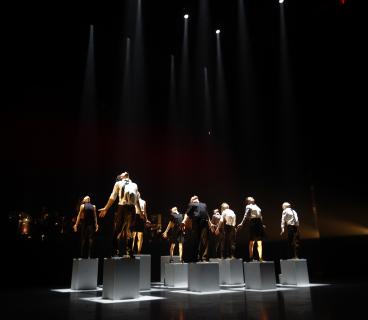 Buzz around a show is an interesting thing. When PuSh International Performing Arts Festival revealed a glimpse of its programming early last year, monumental by The Holy Body Tattoo was a major highlight. And rightly so. The company, co-founded in 1993 by Dana Gingras of Montréal and Vancouver-based Noam Gagnon, hasn’t performed in over ten years. In interviews the two have explained that the disbandment was not controversial but rather a moment for both parties to continue moving their own artistic work forward, and for them that meant creating entities independent of each other.

Media coverage of this one-night performance was extensive, and that’s a great thing for contemporary dance. There’s a lot people can talk about around this new version of monumental (it originally premiered in 2005 and was the last thing The Holy Body Tattoo performed). The seminal post-rock band Godspeed You! Black Emperor joined the dancers live onstage – in the original, monumental was performed to a recording of the Montréal group. The difference live music makes when watching dance cannot be understated. At points I felt as though my own body was vibrating from the wave of sound coming from the platform behind the dancers – I can only imagine what that volume must have felt like closer up.

The press and marketing successfully got word out. The performance was sold out. Standing in line I heard someone say that it felt more like a rock concert than a dance show, and I’m sure those in the box office at the Queen Elizabeth Theatre felt like that too. The show started almost twenty-five minutes late while tickets were collected and everyone finally seated.

And then, the show.

Monumental begins with nine dancers – Caroline Gravel, Louise Michele Jackson, Kim de Jong, Shay Kuebler, Louis-Elyan Martin, Esther Rousseau-Morin, Sovann Prom Tep, Michael Watts and Jamie Wright – perched on white cubed pedestals of varying heights. Dressed in variations of black, white and grey business attire, the dancers propel into motion when the bass beat kicks in. Syncing angular and sharp, abstracted quotidian gestures with the pulse of the score, the dancers move in unison, gradually upping the physicality or momentarily breaking off from the group for frantic solos. The band is still unseen, hidden behind a thin curtain at the back of the stage – one that revealed and descended throughout the work, visually dialing up and down their presence in tandem with their projected sonic levels.