The Holy Body Tattoo pulls off an epic night of sight, sound, and angst with Godspeed You! Black Emperor par Janet Smith, The Georgia Straight 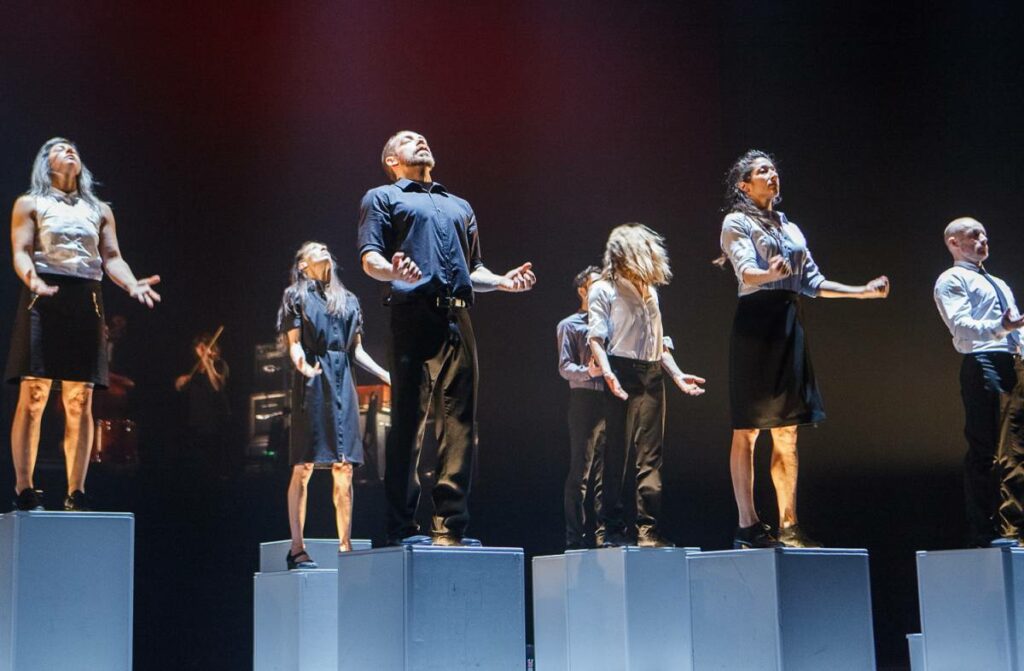 Fittingly, monumental was a word that was being thrown around a lot at the crowded Queen E. last night: in the title of the frantic, sensory-bombarding dancework everyone had come to see; from the stage in an impassioned speech by PuSh International Performing Arts Festival artistic and executive director Norman Armour; and among still-awestruck audience members—a mix of dressed-up dance die-hards and grunge-chic hipsters—in the lobby after the show.

It was nothing less than a monumental effort by PuSh and the Holy Body Tattoo to stage the piece again after a long hiatus, with nine dancers, multimedia projections, and Montreal postrock geniuses Godspeed You! Black Emperor playing live—a dream 10 years in the making. As for the end result: it was as epic as the word would lead you to believe.

The live presence of the eight-member band torqued up the intensity considerably, giving the show the exhilarating feel of one of Godspeed You!’s mesmerizing concerts while offering multiple other layers: the visceral, brutally physical choreography, the hypnotic projections of rushing overpasses and wind turbines by William Morrison, and the enigmatic projected text by conceptual artist Jenny Holzer. The band opened with its driving, haunting wall of sound unseen, and was eventually lit behind a scrim.

The title plays on the clever central device of the piece: the fact that the dancers, for most of the work, have to convulse and twitch, recoil and explode atop 50-by-50-centimetre white blocks—the kind of plinths you usually see in museums. The image works on many levels as a metaphor for the dancers, who are clothed in black and white officewear and sometimes look like moving sculptures. The white pillars give the feel of a city of white skyscrapers, and on their small “islands”, the alienated working stiffs are trapped alone with their stress, unable to reach out to each other.