Dance: Louise Lecavalier in A Few Minutes of Lock and Children 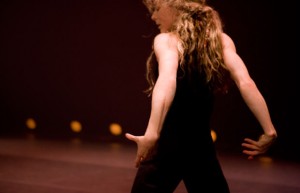 Louise Lecavalier shows in A Few Minutes of Lock and Children that at 52 she can still command the stage with speed, fluidity and refined movement, all shot through with artistic intelligence. Photograph by: André Cornellier

MONTREAL – Thirty years after she flew on stage as La La La Human Steps’ resident female rocket, Louise Lecavalier continues to astonish. In performance, she remains a bolt of pure dance energy. When required, her limbs still move lightning fast, as she demonstrated to great artistic effect 2010 in the marvellous double bill of A Few Minutes of Lock and Children. The same program returns next week to Usine C.

Lecavalier is certainly a virtuoso – one could admire just her speed, fluidity and refined movement. But what’s truly memorable is how her technical mastery is filtered through her personality to stamp the choreography with meaning. It’s not about virtuosity. Lecavalier could command attention on stage simply by folding her arms.

Exactly how the great dancers accomplish this is one of the mysteries of art.

Words can’t explain it, but one immediately senses it when watching Lecavalier and other world-stature performers – Baryshnikov and Evelyn Hart in their heyday, or the Mariinsky Ballet’s Uliana Lopatkina and Diana Vishneva (a guest with La La La Human Steps’ show in Montreal next month). When they dance, their every muscle seems charged with artistic intelligence.

Lecavalier’s double bill at once looks back in time and forward. A Few Minutes of Lock has three duets adapted from two shows that Edouard Lock created for La La La Human Steps in the 1990s, Salt and 2. Lecavalier’s capable partner is Keir Knight, also a former company member. Given Lock’s reluctance to revisit his past creations, Lecavalier is to be congratulated for returning these duets to view. Perhaps they will encourage Lock to raid his treasure chest.

Children is a 50-minute work that Lecavalier commissioned from Britain’s Nigel Charnock. She’d just finished working with Benoît Lachambre on Is You Me, a duet whose slow pace and constricting costumes largely concealed her natural rhythm. Afterwards she felt the need again for speed (there’s something Formula One about her).

“I wanted to be in a duet that was very physical,” said Lecavalier in a recent interview in a café across the street from La La La Human Steps’ Park Ave. studios (Lecavalier rehearses in a studio below but loves to pop in to watch the company at work). “When I saw Nigel performing – he’s a very good performer – he was very physical. I’m so different from him, but I thought something about his movement could link us.