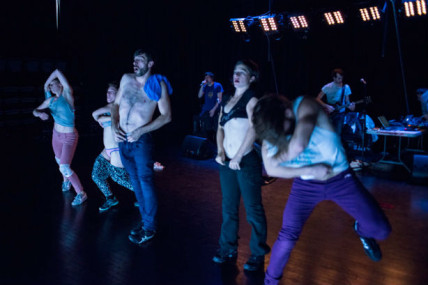 Some like it naked, others don’t. While the state of being dressed commonly goes without notice, nudity – when it happens in public – begs justification. When have the performing artists become so prone to getting naked? Why, in the first place? And, more importantly, can we be sure it is about how art changes, and not about us and our attitude?

Obviously, art history is rife with undress. Popular culture and advertising, too, have had their share in familiarizing us with partial or full nudity, allegedly equating it with honesty and openness in marketing lingo. Would you believe the bold social criticism of Iggy Pop in the Stooges era so easily were he “properly” dressed for his early Detroit shows? Not likely. However, what works fine in rock and roll or commercial photography becomes somewhat more surprising when flashed in the High Art establishments.

Shock tactics and provocation designed to drive tickets sales and win publicity, claims of profound authenticity or the desire to push boundaries might have been propelling dancers and choreographers decades ago. Today, their artistic decisions seem to be much more conscious and theory-based. At its best, the contemporary dance scene can be subsumed in one term: reduction. Reduction of expansiveness, of the spectacular, of the unessential. André Lepecki, iconic writer and curator in the field of performance studies, choreography and dramaturgy, observes in « Skin, Body, and Presence » (1999) the « Increasing display of the bare body in contemporary dance, the eruption of the body as matter, the body in its epidermal strength, in its massive presence. » Notwithstanding the aesthetic and ideological differences among choreographers, Lepecki asserts:

« That reduction of ‘theatrics’ and the emergence of the body’s naked presence in contemporary choreography complicates what has been, until recently, unproblematically called ‘dance’ (…) Accompanying this reduction in dance is a stripping of the dancing body itself. »

The examples are legion. To quote but one, emblematic for its nonexistent staging, one-hour long dance piece Jérôme Bel (1995) had no lighting design, no sound system, no set, and no costumes at all. The new generation of choreographers, notes Lepecki, « Denies theatrics and becomes formally closer to performance art, moreover, to a certain tradition in performance art associated with representation of ‘the explicit body’ onstage. » In other words, a performer’s body set in motion appears to be less about dance as we know it, and more about the qualities and the meaning of the body itself. Just as in many other contemporary art forms, so in dance, the medium becomes the message. Thus, the acclaimed Venezuelan choreographer Javier de Frutos, who danced naked in the early days, has called the experience “the least sexy thing [he’s] ever done.” Similarly, reflecting on Usually Beauty Fails, Frederick Gravel states:

« I weirdly don’t see any nudity in this show, even if yes, there is some. I didn’t think about it this way. We are never completely naked in this show, and when we are, it’s in a kind of anti-climax way. I was more interested in the dancers removing their clothes and putting them back on, while trying to keep a precise attitude. For another part, they are just bottom naked, so it’s more straight to the point of what we need to show, and we wanted to play with the touch rather than with the skin. But to touch each other in this intimate way, we have to take off some layers… I see it more like a performance than dance, even if it’s hard to separate these two approaches. »

Given this, as well as Gravel’s use of complex soundtrack and a post-rock setting, Usually Beauty Fails indeed resembles an improvised gig and performance art rather than a conventionally « composed » dance piece. With so much going on in it – cascades of images, sounds, fleeting thoughts, movements and relations constantly being introduced – one almost forgets the naked bodies. Nudity is not the focus. Bodies are. And so are people – unless, of course, one happens to be a sex-crazed voyeur. Ultimately, the vulnerable, natural state of dancers longing for closeness truly becomes a non-issue.

As a matter of fact, it would be nearly impossible today to find a choreographer – or any serious artist for that matter – using nudity for its own sake. Daniel Léveillé, or Olivier Dubois’ Ballet du Nord, with their trademark, excessive parades of naked flesh, both successfully create layered works of which nudity is but a part. Granted, there are a few pieces out there just trying to make waves and hit the headlines, but those are rare, and generally considered cheap. It is also quite unlikely to encounter them in a quality dance venue. Simply speaking, a great deal of research and progress has been made in cutting-edge dance. Lessons from older – and once similarly confrontational – art disciplines have been learned. Visual arts, sculpture, and the relatively recent happening, performance and video arts have all informed contemporary dance, and yes, they have always accepted nudity. Why is it then that the inclusion and acknowledgement of this tradition by contemporary dance troubles some viewers? Why does real-life nakedness on stage seem a step too far?

This might be a wrong question to ask. Perhaps, rather than debating nudity in the arts, we should start wondering what has made us – the public, curators, and sometimes the artists alike – a bit timid, if not hidebound, compared to, say, the 1970s. Jerry Saltz, senior art critic and columnist for The New York Magazine and three times nominee for the Pulitzer Prize in Criticism, has an idea:

« Lately I keep thinking that the art world has gotten a lot less flexible, and the freedom that I’ve always thought of as completely foundational – freedom to let our freak flags fly and express ourselves, even bizarrely – has constricted considerably. »

In his « When Did the Art World Get So Conservative? » 2014 essay, Saltz further asks:

« So, why this return to the political and cultural commandments? Perhaps because now everyone has a voice and an opinion about every issue, and that voice can sound loud; perhaps because, with a crisis of authority, people are policing themselves and reverting to the last time the rules were known, agreed on, and enforced (…) It’s a return to the good, old days, when everyone knew what was right and wrong, what was allowed, and what wasn’t ».

This intuition sounds about right. Adding to this all-things-monetary, revenues, frequently sales-driven programming, funding bodies, sponsors, and VIP receptions, we may well have the answer we were looking for. Because no matter how radical it seems, nudity and resulting controversies may not be the issue of art as such (it’s still just fine and evolving in its own ways), but a problem of shifting attitudes in both the public and the industry – shifting or, more specifically, regressing at times of considerable dubiety and insidious budgetary cuts, and cuts, and cuts.

I would hazard a guess that, like it or not, nudes are here to stay, even as both presenters and consumers of contemporary dance (and theatre, and cinema), are getting oddly accustomed to play it safe. But this isn’t what art is all about, or is it now?

Since the second half of the 90s visual and media art curator, performing arts curator and TV journalist, he developed and led several dozens of projects, exhibitions and showcases of contemporary art. Between 2005-2011 he directed close to 40 television programs and short documentaries on contemporary art, of which the most popular was « The Alphabet of Polish Performance Art », a TV series documenting pioneering achievements of Polish artists in the field of Live Art and experimental theatre.