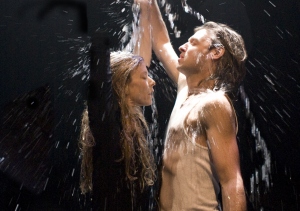 Judging from her Fluid Festival double bill at Theatre Junction Grand on Thursday, Montreal dance artist Louise Lecavalier never stops moving. Or at least, only long enough to catch her breath – and just barely, in the case of the 10 sections of breathtaking restlessness and virtuosity that comprised the first piece on her Fou Glorieux program, British “bad boy” choreographer Nigel Charnock’s Children.

The work, ostensibly a study of the push-pull in the play and strain between a man and a woman – Lecavalier is soon joined in Children by her Fou Glorieux dancer, Patrick Lamothe – starts off with a pulsatingly high-pitched, strobe-lit prelude that has Lecavalier moving quickly around the bare stage on all fours before taking up a bewildering array of anngst-ridden twists, turns and rolls on the floor.

All of a sudden, she claps – and it stops.

And then we find ourselves with a whooshing, samurai-meets-Star Wars-meets-baton- twirling session of playful ambivalence that ends with children’s voices, African drums and the return of the starkly lit harshness at the start of the piece – only this time the strobe effect comes from a camera held by Lamothe and it ends with applause on the soundtrack.

Which ushers in a frantic “inner” dance of Lecavalier and Lamothe to Leonard Cohen’s wonderful Dance Me to the End of Love.

And on it goes.

Sometimes set up like a scrimmage between the two performers – a kind of breaking apart, grasping for nothing, at one moment, and reaching out in unison, but alone in their separate worlds, at the next – Children moves like child’s play (it’s anything but, in the dancing of Lecavalier and Lamothe) through the music of Billie Holiday, a Tom Waits-y number by Richard Desjardins, ”cool” Miles Davis, Janis Joplin and Puccini, among others.

Humour abounds in Charnock’s child-is-father-of-the-man piece. The Billie Holiday song, for example, gets Hollywood vaudeville treatment, while a Terry Snyder version of Puttin’ on the Ritz gets pillow treatment – reminding you of kids plowing around the floor during Kindergarten and pre-K rest period. But here, too, there’s a quick change of meaning: when Lamothe remains alone onstage with a pillowcase over his head, breathing in and out, it reminds you of something far more sinister – of a Ku Klux Klan hood, say, or of someone about to be executed.

The richness and serious physical fun of the Charnock choreography contrasts, but not too sharply, with the work that ends Lecavalier’s show – a 15-minute tribute to choreographer Edouard Lock, founder of Montreal’s La La La Human Steps, the contemporary dance company that Lecavalier was instrumental in bringing to international renown several decades ago.

Here danced by Lecavalier with Keir Knight and the participation of Lamothe, A Few Minutes of Lock (excerpts from Lock’s Salt and 2, we are told) was simply a knockout.

Done to the steady crescendo of an Iggy Pop canon, Lecavalier’s signature slicing-and-dicing gestures represent a kind of rapid robotic sign language semaphore that seems to wind her up into paroxysms of movement that often send her on collision courses with her partner(s).

Faster and faster and further she goes, as the movement broadens and the beat builds.