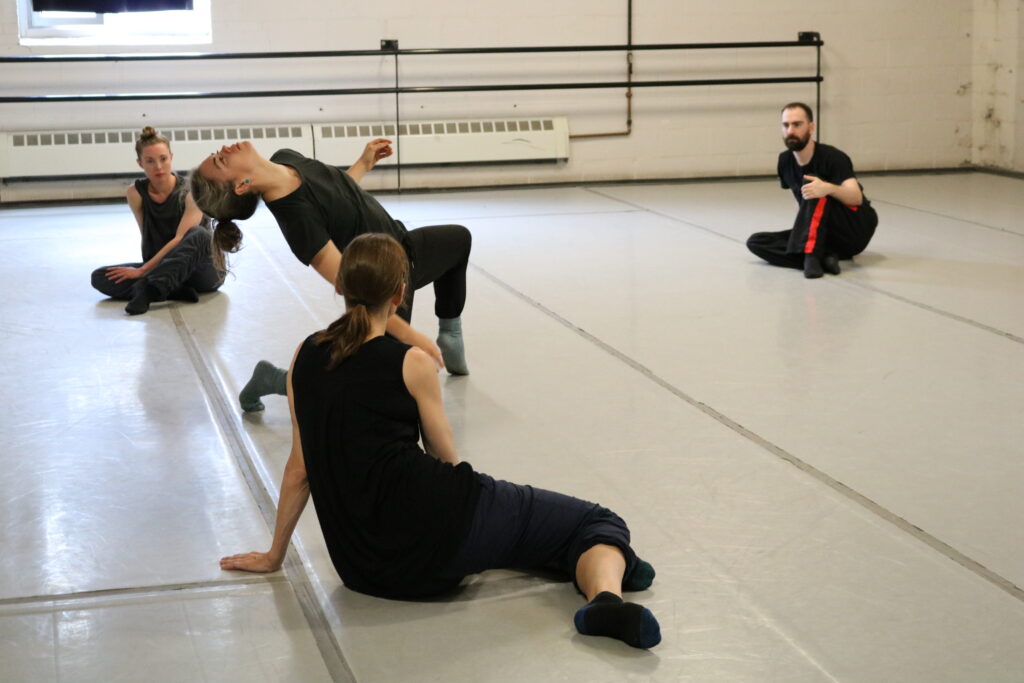 « This work examines how a group can ‘write’ a cohesive story together on stage. My interest in this creation lies in exploration of the question ‘what makes us who we are?’ Is it memory (biological) or is it imitation (experience) or is it all preordained and our fate is set?

When do we become us? When does a group form? Is it over time or experience or both?

I grew up in Singapore (a place I still feel connected to, and a place of No’s!) with an ambivalence to western culture, I wanted everything I saw in teen magazines and also wanted to be me – a South East Asian, Peranakan Chinese. First, I imitated, I carbon copied and over time, I made my own path. The evolution of a dancer is much the same, first comes mastery of set movement, then improvisation where dancers are able to make movement their own and then this. There’s detailed score that the dancers have to negotiate and in doing so it reveals who they are as a group, as people. The question now becomes, how much freewill does one have within a framework? »

Yvonne Ng is a dancer, choreographer, presenter, producer, curator and arts educator. She is the Artistic Director and creative instigator behind tiger princess dance projects, which has been in operation since 1996. Yvonne founded the presentation series dance: made in Canada / fait au Canada in 2001. Joined by festival co-directors Janelle Rainville and Jeff Morris, in 2011 Yvonne transitioned the series into a biennial festival that presents the work of contemporary choreographers from across Canada.

Of Peranakan Chinese decent, Yvonne was born and raised in Singapore and moved to Canada in the late ‘80’s where she completed her Honours BFA at York University. Ng began her training with Madam Goh Soo Khim at the Singapore Ballet Academy. Even before completing her BFA at York University, she had co-founded the dance company, Dance Allegro and was in demand in Toronto’s contemporary dance community. After a year in the Danny Grossman Dance Company, she left to work with choreographers such as Bill James (from 1992-2002); José Navas, Menaka Thakkar; Peter Chin; Dominique Dumais and Kevin O’Day (National Theatre Mannheim Ballett); Stephanie Skura; and Tedd Robinson, to name a few.

Her commissioned choreography and performance have earned her eight Dora Mavor Moore nominations and taken her to Australia, Singapore, across Canada and the USA. Writers describe her work as ravishing, paradoxical, immediate and hard-edged, like painful memory.Yvonne is a certified Open Source Forms© (Stephanie Skura/U.S.A.), C-I Training™ and Ashtanga Yoga teacher and has taught in the Dance Departments of Ryerson and York University in Canada, the Theatre Department at Juniata College, Pennsylvania, U.S.A. as well as Nanyang Academy of Fine Arts (college) and LaSalle College of the Arts in Singapore.

Yvonne is a recipient of the K.M. Hunter Artist Award, the New Pioneers Arts Award and the Chalmers Arts Fellowship. A multiple nominee, in 2000 she was honoured with a Dora Mavor Moore Award for Outstanding Performance. In 2007, Ng received the Ontario Premier’s Award for Excellence in the Arts – New Talent Award; she was selected by fellow recipient and Canadian dance legend Peggy Baker. In addition to choreography and performance, Ng is the Artistic Director of Series 8:08.